Following on from our successful archive trips to Greenwich and Portsmouth, on 18 November NRS members had the opportunity to visit the Lloyd’s Register Heritage Centre.  Lloyd’s Register began life in Edward Lloyd’s Coffee House in 1760, as a location for London merchants to meet and discuss their business interests. From that moment, the Society grew into an international organisation and successive owners of the coffee house continued to specialise in providing customers with up-to-date and accurate information about shipping and the marine insurance market. In around 1786 the Society for the Registry of Shipping moved from Lloyd’s Coffee House and over the next few years continued to grow, with over 200 subscribers to the Register Book.

The ship classification system was updated, but the changes disadvantaged ships being built outside of London and so those outside the city set up their own Register in protest. By 1815, it was decided that a joint register was the way forward and an agreement between both parties was reached in 1834 when the two groups met for the first time as the Committee of Lloyd’s Register of British and Foreign Shipping. By the end of the nineteenth century, and with Britain’s ever increasing merchant fleet, Lloyd’s Register came into its own, developed vastly and moved to its current location at 71 Fenchurch Street, London.

The Heritage & Education Centre look after the history and heritage of Lloyd’s Register and the Foundation. They have a library and archive holding material from over 250 years of marine and engineering science and history, some materials dating back to the 1830s.

We started with a talk from Charlotte Ward, the Education and Outreach Coordinator, in the historic General Committee Room. This beautiful room is filled with Italianate architecture and names of noted British scientists and explorers, Cook most notably. We were told about the history of Lloyd’s, of the building and how they work with Lloyd’s of London. After walking down the beautiful staircase, past models of ships and carvings of vessels throughout history, we visited the old library before heading to look at some wonderful archive documents.

This time, we looked at more than just documents, even a Lloyd’s Register cricket trophy which was blown up as it was left in a holdall at a train station. We saw stories of wild cricket dinners and some Lloyd’s surveyors even played for England (and in train carriages), records regarding the Titanic (which Lloyd’s Register did not classify – they actually only worked on the anchor).

Some notable documents were documents relating to the Royal Yacht Britannia, including a Post Office telegraph, blueprint of the vessel and the survey report listing

Another interesting find was the 1835 Surveyor report of the Hecla, launched in 1815. In 1819 this ship was converted to an arctic exploration vessel and made three journeys in search of the northwest passage, as well as one to the North Pole, all under Lt William Edward Parry or Commander George Lyon.

An interesting use of the Register books was by the Germans in WWI. These books were readily available to anyone and German naval officers could easily calculate tonnage and tick off merchant ships they had sunk. 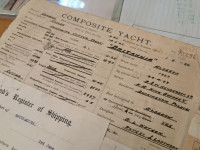 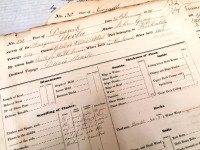 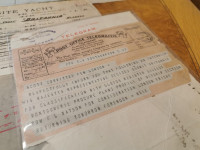 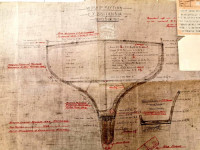