Exploring our First and Famous Collection

What strikes one initially about the Lloyd’s Register books is their uniformity. Regardless of size, of builder, of technical innovations, every ship is assigned one row; a clean slate of essential information, a foundation upon which history can be written. These Registers remind us that despite the grandeur associated with certain names, every ship starts life as a shell.

Take the Register of 1869-70. Two rows below the 62-tonne Theresa (largely forgotten by history) lies the first entry for Thermopylae. A 947-tonne clipper completed by Walter Hood & Co. in 1868 for Thompson’s Aberdeen White Star Line, she was breaking records from her maiden voyage (63 days from Gravesend to Melbourne). Speed was not her only virtue; her sleek lines and finish were a source of admiration for many. The more romantically inclined Captain of Charybdis even proclaimed, “(i)t does my heart good to look at you”.

Thermopylae was equipped to carry up to 1000 tonnes of tea, and proved to be a formidable competitor in the Chinese tea trade. Following her trip to Melbourne, she sailed from Newcastle to Shanghai in 28 days (a second record) and loaded her first cargo of tea from Foochow in 1869. Few clippers came close to Thermopylae, but the rivalry between her and Cutty Sark was fierce.

These two ships have a largely intertwined history, from the tea trade to their displacement into the Australian wool trade as a result of steam ships coming to prominence. Their rivalry arguably came to a head in the ‘Great Race’ of 1872, from Shanghai to London, but many considered this to be an unfair fight. Although Cutty Sark finished on 19th October, nine days after Thermopylae came in, she was delayed off the coast of South Africa due to a broken rudder. Additionally, the question of pure speed appears to have a definitive answer; while Captain Jenkins claimed a record of 358 miles in 24 hours aboard Thermopylae, Captain Moody saw Cutty Sark travel 363 miles in the same period of time. Regardless, both ended up on the Sydney wool route by the 1880s.

In 1890, 8 years after leaving the tea trade, Thermopylae was sold by the Aberdeen White Star Line to a buyer in Canada - Mr. Redford of the Mount Royal Milling & Manufacturing Co. of Montreal. She still made good time on rice runs between Rangoon and Vancouver, despite an 1892 survey from Lloyds that found her to be in poor condition (she was repaired, and her rig was reduced to that of a barque). She was sold to the Portuguese Military in 1896 and renamed Pedro Nunes, becoming a training ship.

On 13th October 1907, Pedro Nunes was towed out onto a lake by two Portuguese men-of-war and torpedoed amid a blare of fanfare and flying colours. Some maintained that the ceremony was a maritime display, a demonstration of Portuguese military prowess. Most considered it a Naval funeral, a nod to 39 years of stories, challenges, people and history – a history rooted in that row on that page in that Register book.

To learn more about the Thermopylae and view documents relating to her, click here. 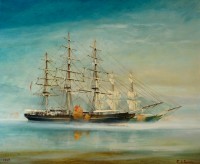