Cheque in the Cupboard!

Max Wilson
Cheque in the Cupboard!

Most of us have moved house at least once in our lives and in doing so a strange collection of items from the depths of our wardrobes, suitcases and sofas will invariably rise to the surface. Generally, these items range from the precious to the (often) biohazardous, destined for the family vault or, more frequently, the skip. Ahead of the refurbishment of our London office, HEC came across a strange item with an even stranger history; a 101-year-old cheque receipt for a whopping £1000, over £57,000 today!

Found within a cupboard, the receipt is dated 12th July 1918, and was issued at the Liverpool headquarters of the Oceanic Steam Navigation Co Ltd (White Star Line). Numbered ‘3500’, the receipt refers to a cheque received from the Chairman of Lloyd’s Register of Shipping, Sir Thomas Lane Devitt. This cheque, however, was not meant for the White Star Line itself, but was for ‘distribution amongst the master, officers and crew of SS Olympic in connection with the sinking of a submarine.’

When the RMS Olympic was finally completed in May 1911 at the Belfast shipyard of Harland and Wolff, the White Star Line proudly declared her the largest ship in the world; at 45,000 gross register tons. Her reign was briefly interrupted with the launching of her sister Titanic in April 1912- and then swiftly reinstated soon after…until finally beaten by the SS Imperator in June 1913. Ushering in a new age of luxury travel, Olympic’s maiden voyage from Southampton to New York (via Cherbourg and Queenstown) attracted huge media attention, just over 10,000 watching her depart New York City harbour. In the outbreak of the First World War Olympic was requisitioned by the British Admiralty in May 1915, repainted, lightly armed, and converted to transport up to 6,000 troops at one time.

While en-route for Cherbourg carrying US troops, Olympic spotted U-boat 103 1,500 feet away, preparing to torpedo the liner. An easy target the odds were stacked in the favour of U-103 when Olympic’s captain, Bertram Fox Hayes, gave the order to open fire. Simultaneously, Captain Hayes also ordered the liner to turn about and ram the U-boat- a dangerous final resort. Later reports state that U-103 could not flood her torpedo tubes to open fire. Seeing Olympic steaming ahead the submarine dove 100 feet to escape her path, but not quickly enough. Moments later, Olympic’s propeller sliced through U-103’s pressure hull forcing her crew to scuttle the submarine and abandon her. Nine U-boat crew were killed in the sinking, and 31 picked up by the USS Davis- Olympic having continued unabated to reach port and avoid further attack. Later examination found only Olympic’s hull plates dented, but nothing serious, and Captain Hayes was awarded the Distinguished Service Order for the incident.

During the First World War RMS Olympic safely carried 200,000 passengers and troops. A familiar sight during her wartime career she earned the nickname ‘Old Reliable’; one that stuck throughout the remainder of her merchant career until she was decommissioned in 1935 and broken up.

This cheque receipt bears witness to the gratitude of the shipping community for the protection of life and property and constitutes an amazing archive find! Definitely worth checking down the back of the sofa when you next move! 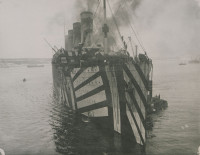 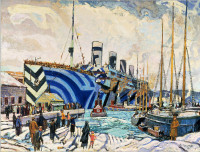