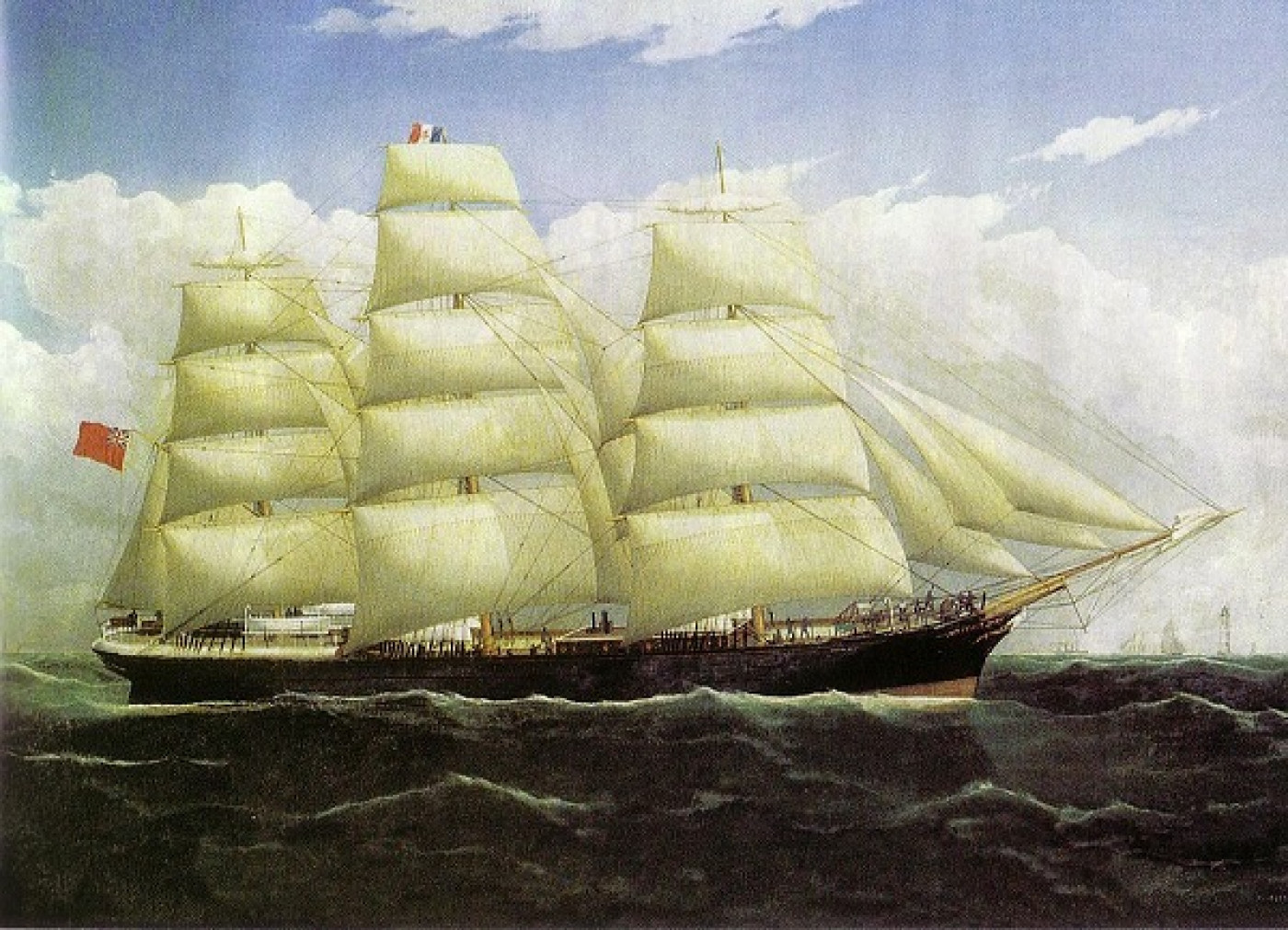 Dunedin was an iron sailing ship of 1,320 tons built in 1874 in Glasgow by Robert Duncan and Co for the Albion Ship Co. She was involved in the early trade in frozen meat between Australia, New Zealand and England. In 1882, she brought a cargo of frozen lamb from New Zealand to the UK. This was the start of commercially viable transport of frozen meat, opening up markets in the northern hemisphere to the agricultural economies in the southern hemisphere, transforming food consumption habits.

A current reference number/code used to uniquely identify each record.

Date in which construction of the vessel was completed.

Broad categories and subdivisions of vessels related to their purpose or function.

The listed port to which a given vessel belongs.

Plan of Midship Section, including details of riveting, for Dunedin, 25 August 1873

Report of Survey for Repairs for Dunedin, 9 February 1875

Report of Survey for Repairs for Dunedin, 21 August 1878

Report of Survey for Repairs for Dunedin, 12 October 1886

Report of Survey for Repairs for Dunedin, 26 October 1887

Report of Survey for Repairs for Dunedin, 21 August 1881

Report of Survey for Repairs for Dunedin, 6 August 1889

Report of Survey for Repairs for Dunedin, 23 January 1890

Press copy of W Thomson's expenses regarding survey of Dunedin carried out at Port Chalmers, January 1890

Use the data export button to extract customised data sets from the Ship Plan and Survey Report Collection. Available in TSV and CSV formats.

Name of ship as recorded on the record

The process of transferring a vessel to water, but not necessarily her completion.

Unique identifier for a given ship, it is assigned by a builder.

The country in which the vessel’s construction took place, at the time of writing.

The listed port to which a given vessel belongs.

Location where a vessel’s survey was undertaken.

Physical arrangement of a ship’s masts, sails and rigging.

Type of fuel used onboard a vessel.

Is the steamer assisted by sail?

Confirmation as to whether the vessel was equipped with refrigeration machinery to aid in the transport of frozen or chilled cargo/goods.

Does the vessel possess an auxiliary power source?

Is electric lighting fitted to the vessel?

Abbreviations of the names of ports with Lloyd’s Register survey offices.

The year in which a vessel’s construction is completed.

The individual and/or organisation listed as having been responsible for constructing the vessel. This can/may be the same as the owner and/or manager.

The port or place in which the vessel’s construction took place, at the time of writing.

The country (flag) that a vessel is registered to, at the time of writing.

The individual and/or organisation listed

Broad categories and subdivisions of vessels related to their purpose or function.

A vessel’s means of propulsion.

Is machinery fitted at the aft of the vessel?

Generally a smaller additional auxiliary boiler (often used while the vessel is at port).

Is a donkey boiler fitted?

Name of the Proving House responsible for the public testing and certification of a vessel’s anchors and/or chain cables.

Classification symbol assigned to a vessel by Lloyd’s Register’s Classing Committee denoting the quality of construction and maintenance.

The name of the port/place of destination given.

Report an issue with this ship

Have you noticed missing or incorrect data or images for this ship?
Please let us know and we will rectify the issue as soon as possible.