On the 3 September 1939, Britain, France, Australia and New Zealand declared war on Germany following the German invasion of Poland. Lloyd’s Register had already made contingency plans in 1938 and, learning from the First World War, felt that they were more prepared for the coming of a new type of war. As shipping was an integral part of the war effort, Lloyd’s Register played a vital role in ensuring that vessels were constructed to meet demands.

These are just a handful of stories of staff and their experiences during the Second World War.

The Society’s work in France was severely curtailed due to the German occupation. However, the Marseilles office was kept going by a Belgian surveyor, Gustaav. He was a refugee and only had his Belgian identity card. His work during the war meant that he became widely respected locally. Gustaav’s work also meant that the office was able to pay its way and subsidise the cost of the office in Paris. Following the liberation of Marseilles in 1944, Gustaav was transferred back to Antwerp where he later became principal surveyor for Belgium.

Hamada had joined the Kobe office of Lloyd’s Register in 1935 as a surveyor. Following America’s declaration of war on Japan in 1942, Hamada joined the Japanese Navy. His experiences of surveying work meant that he was sent to manage the dockyard at Taikoo in Hong Kong. When he arrived in Hong Kong, he came across the abandoned Lloyd’s Register office. Society offices stationed in countries either under occupation or fighting for the Axis powers, were closed and operations ceased. Knowing the importance of the documents and records that had been left behind, Hamada rescued them and hid them for safekeeping, at great personal risk. Following the war, Hamada returned to work for Lloyd’s Register, retiring in 1970. The last entry in his surveyor’s journal read;

‘In wonder my duty commenced and in wonder it ends. Admiration fills the inter-space’

Clara joined Lloyd’s Register as a cleaner in 1912. Based at the head office, she would go on to have a long career at the Society, working through two world wars. During the Second World War, Clara, who was known for her fierce loyalty to the Society, would often be seen running around the building with shovels of lit coals, disposing of them in the basement. She ensured that the offices abided by the blackout rules and would tell surveyors and staff off if they had left their fires burning.

Johnny Auer joined Lloyd’s Register in 1949 from the British Corporation. During the Second World War he was a member of the Dutch Resistance. Auer was a fluent German speaker. He once donned a Gestapo uniform and, carrying forged papers, drove to the prison at Scheveningen where he successfully asked for the release of several important prisoners whom the Resistance then smuggled across the Channel to the UK. Auer was employed in Dutch shipyards and would engage in subtle sabotage of the German navy, skewing calculations to ensure the vessel ran aground.

Frederick Cocks, known as Freddie, joined Lloyd’s Register in 1919 as a ship surveyor after he had won a Lloyd’s Register scholarship in 1909. Freddie served during the First World War and was one of the men trapped in the submarines K13 when she sank in January 1917. The survivors were rescued after 54 hours. Initially based in Middlesbrough, Cocks worked in Newcastle and Russia. Before the outbreak of the Second World War, Cocks was based in Germany but was able to escape with his colleague Rex Shepheard. After returning to the UK, he was made principal surveyor for Japan, but this transfer was postponed. Instead, he was sent to California to supervise the merchant shipbuilding programme. He returned to London in 1942, retiring in 1956.

When the Japanese entered the war in 1941, Caister was living with his family in East Java. He was captured and interned when the Japanese took over the island. He was taught mathematics by one of the other boys in the camp and attended maritime courses given by master mariners and teachers of the Nautical Academy of Batavia who were in the camp with him. After the war, Dobson studied naval architecture at Delft and joined Lloyd’s Register 1955. He played a key role in the development of the Society’s work in Poland and was awarded a MBE for his services in the Baltic.

A member of the Lloyd’s Register Cricket Club, George joined the RAF. He was short down and held in Stalag Luft III, later famous as the camp of the ‘Great Escape’. George was a member of the escape committee.

Ron and Ted were brothers and both messenger boys at 71 Fenchurch Street. On the 7 September 1940, Ron, along with his mother and three sisters, was killed during the first Blitz whilst taking shelter at a local school. Ted survived and continued his work at Lloyd’s Register. He carried out first watching duty and would play his accordion to help keep spirits up.

One unique part of our archive collection is the unopened letter left at 71 Fenchurch Street when a member of staff went off to serve in the war. Instructions said for it to only be sent and opened in the event of his death by enemy action. Thankfully, the member of staff returned from the war and the letter has remained unopened. 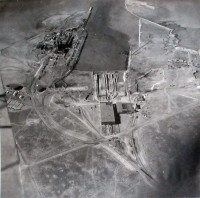 If you have any information on the people involved in the letter or have a link to any of the men listed on our war memorial, do get in touch. We would love to hear your stories and share our records! Please email charlotte.ward@lrfoundation.org.uk