Charles Thomas Squires was born in July 1884 and was the son of John Robinson Squires (1850-1920) and Mary Elizabeth Eaddy (1851-1927). He lived in Brockley and married Grace Ethel Ancutt in July 1910. He was a member Clerical Staff at LR and played for the Lloyd's Register Cricket XI.

Squires was gazetted a second lieutenant in the 11th Battalion Royal Sussex Regiment in 1917. 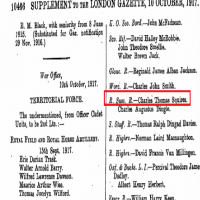 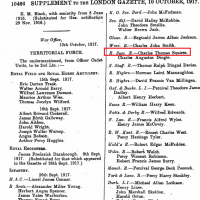 Squires would have been involved in the Spring Offensive of 1918. The Spring Offensive, which began with Operation Michael, was the German’s attempt to force the Allies into retreat and regain land lost. Much of the fighting took place over the wilderness that had been left by the Battle of the Somme. At the end of March, the German army advanced towards the vital rail-head at Amiens, pushing the British line back.  The German army made significant territorial gains in the Spring Offensive but did not meet all of their objectives and were left exhausted and were not able to hold their new gains. German losses were around 250,000 men, many of them irreplaceable élite troops. Allies lost c. 255,000 men of which the British suffered 177,739 killed, wounded and missing. The allies would take advantage of this situation and end the war.

Squires died on the 30 March 1918 aged 33. He died of his wounds and so it is likely he was wounded during the battle towards the end of March.

"Considered the case of Mrs Squires, widow of Mr C.T. Squires, a Clerk on the London establishment, as regards pension. Ordered that Mrs Squires be granted during the Committee's pleasure, a pension, plus war bonus, in accordance with the regulations of the Society's pension scheme."

Squires' grave can be found at the Adelaide Cemetery, France. For further burial details including Squires' grave registration report, visit his portal on the Commonwealth War Graves Commission website.

More information about Squires can be found on the Imperial War Museum's Lives of the First World War website.

If Charles T Squires is one of your relatives or you know more about his life, get in touch at hec.info@lrfoundation.org.uk!